You might think that this a really silly idea. You are right! The least you can say about this idea that it is silly, but wait until you read the whole thing, then you will think that it is beyond silly. Way beyond!

OK... I thought about the way procrastinators operate. They let things go until the last minute. Actually, the word, minute, is not accurate in this context. We usually say minute to refer to time. I mean to say that they, the procrastinators, leave things until there is just enough time to do the task before the deadline is over. Sometimes, though, they get it wrong, and it turns out that they didn't estimate things properly. That's when the job either gets partially done, or it is completed sloppily.

So how do procrastinators think of time? Why is it that they leave things until the last minute? How does their internal clock operate? The last question probably answers the other two that preceded it. But before I go into their internal clocks which I will later on try to model, I will talk about regular time keeping.

We usually think of time as 24 hours, 12 of which are day and 12 that are night. We simply divided the total length of time into 24 hours. We could have as easily divided the total length of time into 33.5419 Hours if we wanted to, but it would have been difficult to manage. Imagine what it would be like to tell someone that you would like to meat (by the way, this was how I spelled the word, meet, when I called for an IEEE meeting in 1994, anyway...) them in the afternoon. What would a wrist watch look like in this case?

Each hour is equal in length to the other. The hands on a wrist watch turns around the clock giving each second an equal share (I almost said, "an equal amount of time," but that wouldn't be fare since I was trying to create a definition of it).

The way we look at time is different than that of the procrastinator's. We look at time as equally divided intervals, but procrastinators don't. They see the first hour (from the time they wake up) as being the longest. The next hour is shorter, and the next is even shorter. It gets shorter and shorter as time progresses. That's why they don't do anything during the first hour, or the next or the next. They leave things until the last minute.

As an example of how the two times work, let's assume that we have two clocks, clock1 counts time the usual way, and clock2 operates just as the procrastinator sees it. If we start both at 10 a.m. (this is when the procrastinator wakes up, I assume), after one hour of regular time it would be 11 a.m. on clock1, but it would be something like 10:10 on clock2.

When clock1 says that it's 12:00 p.m., then clock 2 would have said 10:30. Let's be clear about something, the procrastinator keeps time in a non-linear fashion. Just when the day is over, the procrastinator looks at his/her watch and notices that he/she needs to do something urgently or else. The reason for this haste is because when clock1 is advancing ever so equally to the end of day, clock2 approaches its end of day very quickly. This is the complete opposite of how clock2 started. 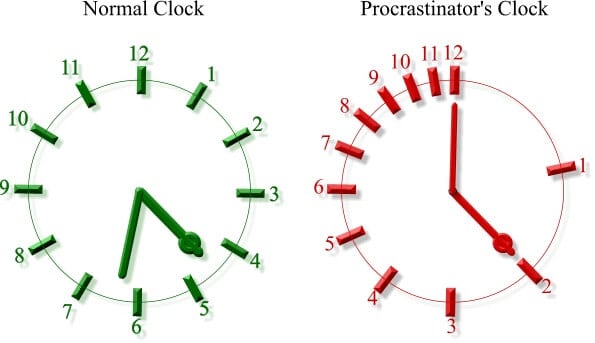 This is how it works:

This page was visited by 0000 number of procrastinators. They will visit some time later.